and How To Know if it is Affecting Your Home

The most common types of energy fields that cause geopathic stress emanate from Hartmann Grids, Underground Streams, and Geological Faults

Geopathic Stress has been studied and researched extensively for the past hundred years across different cultures.

In the 1920's the west, the German, Baron Von Pohl pioneered research. This is predated by the Chinese by over one thousand years are the study of mysterious earth energies was the focus of Feng Shui.

Will LeStrange has studied both traditions.... touring China and learning various "Earth Acupuncture" traditions as well as lecturing on the subject in Munich, Germany.

The following article is taken from the research of Roy Riggs, a researcher from the UK, you can find more at www.royriggs.co.uk

Geopathic Stress:    Is the result of spending long periods working or sleeping above any building or place where the natural energy of the Earth is disturbed by weak electromagnetic fields created by underground streams, certain mineral concentrations, fault lines and cavities.

Some early symptoms often experienced above these geopathic zones are related to restlessness, headaches, insomnia and fatigue. If you continue to stay in these areas especially during sleep, then in the long term the stresses on our bodies will emerge as more serious conditions such as diseases of the central nervous system, Multiple Sclerosis (MS), Chronic Fatigue Syndrome (CFS), miscarriages, and cancer.

While we are asleep our body should be resting so it can repair body cells, fight infections and absorb nutrients from food. However, if we sleep in an area affected by geopathic stress, our body has to use all its energy just to keep its vital organs going. As a result, our immune system becomes weakened, which means it has difficulty in absorbing nutrients or fighting off infections as efficiently as it should.

In Germany and Austria today there are signs of the seriousness with which geopathic stress is taken. Not only are the public more generally aware, but their government's funds aid and continuing research into the matter. In some schools, children are moved at frequent intervals to avoid possible harmful effects. Reports from other countries such as Switzerland, France, the Netherlands, Belgium and Scandinavia indicate that they too have been taking notice.

Can These Geopathic Energies be Neutralized?

There are many factors that can contribute to an illness. Geopathic Stress is only one of them and it is becoming more difficult to gauge especially when the natural energy field is constantly changed and amplified by man-made electromagnetic fields.

If geopathic stress is suspected, it makes sense to move away from the source or to think about dealing with the threat. Moving may be relatively easy but neutralizing it is fraught with many problems. Claims and counter- claims abound regarding devices to achieve this, leaving the public in total confusion.

From an incredible range of gadgets offered there are many tales about their ineffectiveness or of making the receiver feel much worse. There are many products on the market that claim to cure some or all geopathic zones of its noxious energy. Most of these claims are quite dubious and do not stand up to the most rudimental scientific testing. Fortunately, there are now a growing number of dowsers that are equipped with scientific monitoring instruments that can test such claims.

Case Study of a Neighborhood affected by Geopathic Stress 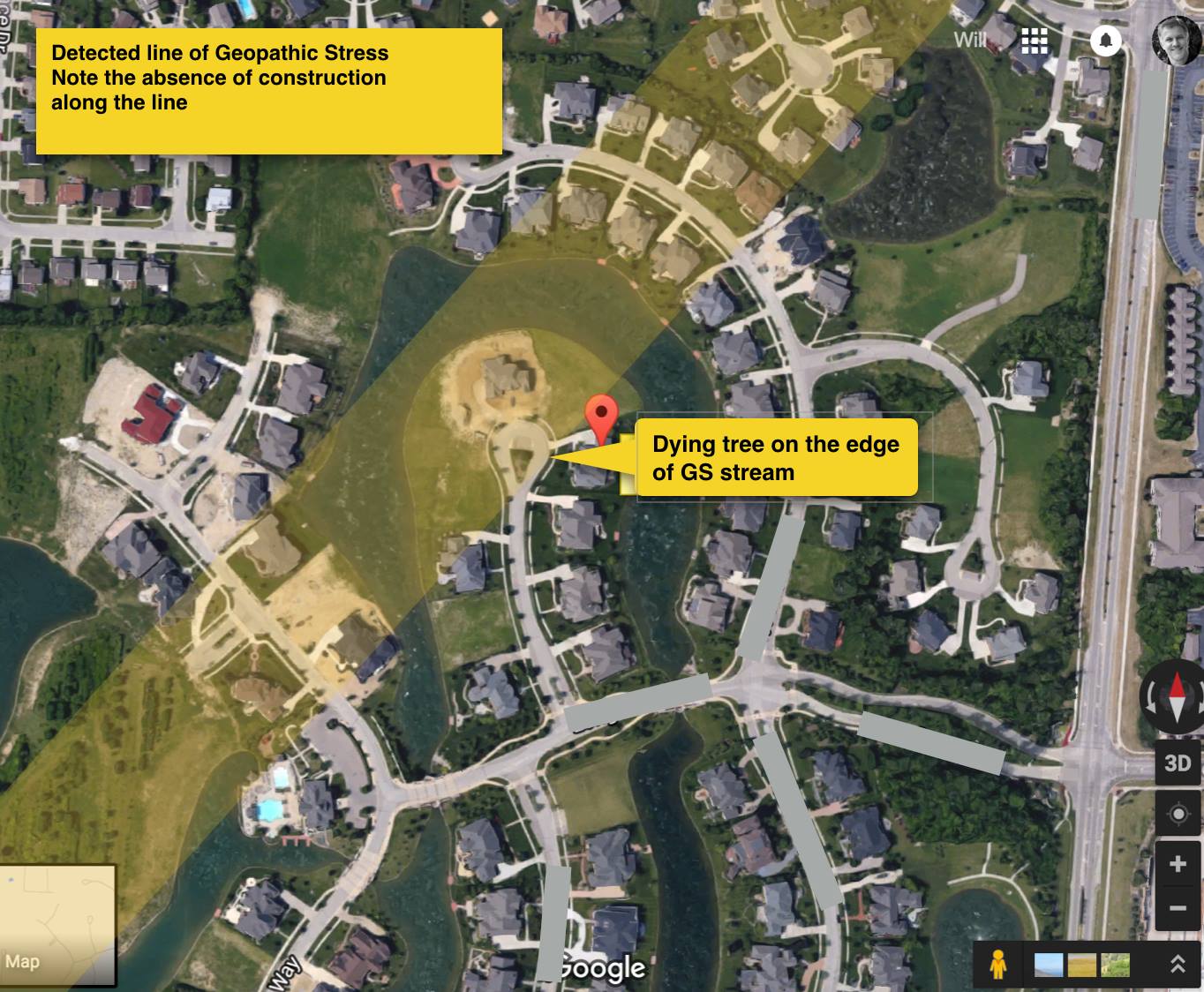 In this example taken from Google Maps, you can see the development of a new subdivision north of Cincinnati, OH. The yellow line denotes the course of the Geopathic Stress. Almost by instinct, the developers have avoided developing the area where the GS is most noxious.

Almost by instinct, the developers have avoided developing the area where the GS is most noxious.

It just so happened that the occupant of the house marked by the pin called me because they were having the most extraordinary run of bad luck... death, illness, accidents, and were unable to sell the house (it was on the market for 5-years) Needless to say we turned that around after one treatment.

Needless to say we turned that around after one treatment.

Cities where you can connect with us and our associates:

Don't Want to Call Us?

Send Us Message Instead
Touch to Call!